From a room in her West Oakland home, Cate White paints the human condition. Bringing colorful characters to life with acrylics, spray paint and house paint on canvas, she explores our deepest fears, predicaments, and foibles. Figures straddle a line; present in their environment while also detached, of this world yet ethereal.

White grew up in the backwoods culture of guns, meth, and 4x4s near the town of Boonville in Mendocino County. She spent most of her twenties living in a cabin on the coast trying to be a writer. In 2002, at the age of 30, wanting to be more engaged with the body, beauty, and the senses, she quit writing and started painting. She moved to San Francisco to try to connect her artwork to the larger world.

“Having lived on the outskirts for most of my life, I had a difficult time feeling at home in the city,” she said. “When I moved to West Oakland in 2009, I immediately felt a connection and familiarity. Poor Black people and poor white people have more in common than most people think. I found family here.”

White is inspired by the nobility of the human struggle with existential despair and societal forces that deny human rights. She is interested in understanding how these struggles intersect and what we can learn to truly transform culture into a more nurturing environment.

“As a kid, I experienced a painful gap between what I felt to be true about the world, and what everyone around me claimed to be true,” she said. “This set me on a life mission to see through surfaces and reveal emotional subtexts.” Her search for truth has taken her in many directions, both culturally and psychically. Making art is one way to share her discoveries, as she unearths hidden depths in her own consciousness. With series titles such as “Hello Cruel World,” “Dirty Work,” and “Primal State,” White is processing the urban world around her. 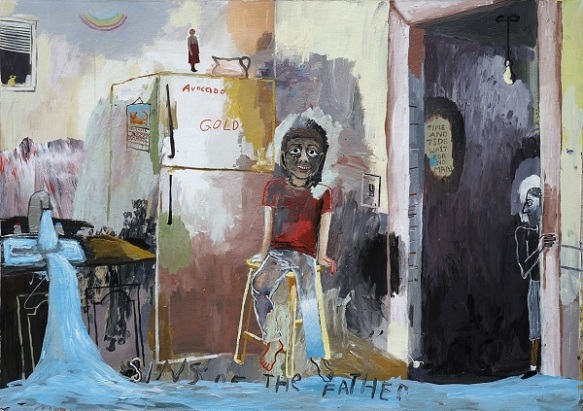 “Sins of the Father” – Cate White

A self-taught artist now represented by Guerrero Gallery, she found a spark of life with members of the outsider art movement, and found resonance also with the work of artists Jean Michel Basquiat, Philip Guston, Robert Colescott, and Alice Neel. White also feels influences from her childhood; a Norman Rockwell book she once leafed through, and her grandmother’s needlepoint.

Every tax-deductible donation helps us grow to cover the issues that mean the most to our community. Become a 48 Hills Hero and support the only daily progressive news source in the Bay Area.

For White, each new body of work is a major psychological undertaking. She starts with a sketch, then begins applying paint to a surface using rollers, spray paint, poured paint, and thin washes to create background. Next, she adds figures, objects, and environment as an outline in paint, filling in some figures while leaving some areas empty. She also has a daily drawing practice, which she sees as an opportunity to work intuitively with little at stake, resulting in some of her favorite works.

Though her work appears loose, White would like people to know that it’s not easy, fun, and free, even though it might appear that way. She wants to clarify that, “the apparent freedom is the product of meeting the demons of fear, over-control, and doubt and winning for just seconds at a time.”

White said that the global crisis, with its layers of uncertainty, was very rich and fertile territory for exploring a more heart-centered quality in her work. Experiencing the societal upheaval from a deeper, more timeless space, White said she is sure it will imbue the next body of work with a more archetypal, elemental awareness.

While primarily a painter, White also works in sculpture, video, and bookmaking and has exhibited her work since 2014. She has done a year-long residency in Roswell, New Mexico, and others at the Atlantic Center for the Arts and the Mills College art museum. White has a solo exhibition at Qualia Contemporary Art in Palo Alto titled “Here to Returnity,” which runs from December 3 through January 15.

In this exhibition, White will explore the cyclical nature of destructive power structures like colonialism, white supremacy, the patriarchy and capitalism. In her piece, The Problem, White reimagines the Norman Rockwell painting, The Problem We All Live With, an iconic image of the Civil Rights Movement.

White plans to resume a live Instagram show called How Do You Paint with Cate White, framed on the PBS show, The Joy of Painting. To bring. balance to urban life, White meditates and goes backpacking in the wilderness when she can and is considering moving her studio to Mendocino.

“I like the feeling of anonymity and neutrality and taking a break from all the stimulation of life,” she said.

(This article first appeared in the January 4, 2021 edition of 48 Hills. Click here to view the complete published article.)