Visionaries: Eugene Tssui and The Fish House in Berkeley 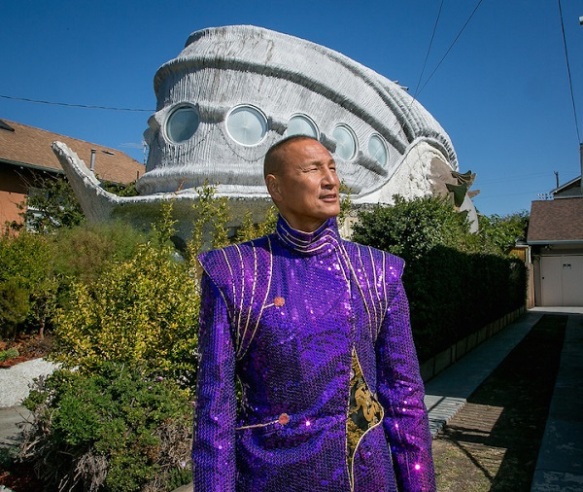 Berkeley is known for being a bit quirky and off the mainstream grid. Visionaries walk among us, unbeknownst to most people, unless they stand out in a particularly extraordinary way. Case in point: Eugene Tssui, the architect of the so-called Fish House in West Berkeley. The house, also known as Ojo del Sol and  Tai Yang Yen (the Sun’s Eye),  or more simply, The Tssui House, is located at 2747 Matthews (between Ward and Oregon) and has been called the safest house in the world due to its shape, materials and resistance to natural disaster.

A precise ellipse in plan, this 4-bedroom, two-story structure with circular living room and a sunken outdoor patio and carport, is formed on a reinforced lattice structure similar to the framework of a Cholla cactus. The house as a whole is meant to conceptually mimic the tardigrade, a  micro-animal that is highly adaptable to extreme hot and cold temperatures, radiation exposure and is sustainable without food or water for over ten years. Wow!

The designer of this marvel, Eugene Tssui, is beyond being just a visionary, nature inspired, eco-minded architect. A self-described polymath, he is an accomplished musician, elite level athlete, flamenco dancer, furniture and clothing designer and an author. Phew! In chatting with him, he feels other-worldly, preternaturally progressive, energetically boundless  and downright outré, to say the least. I spoke with Eugene recently and this is what he had to share about the birth and life of the Fish House.

1) What inspired you to build the Fish House and why in Berkeley?  It was the result of fulfilling the particular needs of my parents, which among other things, were to have a home that was a protective cocoon from the world, something quiet and fortress-like, where they could create their own way-of-life and not be intruded upon by the world.

The house also needed to be quiet and peaceful and they didn’t want to have to negotiate stairs so I created a spiral ramp within the house that travels from floor-to-floor.

It was also important to have lots of easy opening/closing windows and minimal use of electricity all within an earthquake, fire and flood-proof building. Specifically, in an earthquake, the building acts like a boat, because the entire building structure is a continuous, unbroken series of continuous reinforced concrete with curved surfaces that have no corners to break, hence all the stresses and strains of the building are dispersed and unilaterally accommodated with no point-loads to break anything apart.

2) How does the house continue to inspire? For me, the building inspires because it is an example of a living environment that defies convention and the stupidities of tradition. It is there as an example of questioning the truth of nature and natural disasters and how to model low-energy living. It’s the creation of a human made environment that addresses these forces of nature. Living in this kind of environment influences you to do the same, that is, to question the truths of being a human being and ask fundamental questions about yourself and your place in the world.

When you live in such a place like the Fish House, you are experientially influenced by its uniqueness and its distinctive qualities of natural light, spatial light and shadow, its quietude, its sense of security, privacy and protection. This sense of security and safety instills one to take risks and to dare to try the untried. The Fish House nurtures this psychology. It is a compelling environment that prompts you to be a voice for originality and distinctiveness.

It inspires because it is the exemplar of the truth of natural disasters and energy/mechanical systems-free living where mechanical/electrical heating, ventilation and air-conditioning are non-existent, and therefore, the house does not contribute to the 45% of global toxic pollution given-off by buildings everywhere. The Fish House uses none of these systems and is therefore devoid of pollution entirely. This aspect of the house is an inspiration in itself.

And the house inspires people to realize that architecture can be more than a square box. When bus-loads of children stop at the house they immediately recognize that we human beings can do more than build mundane boxes. Children see that there can be logic, courage and originality in the creation of our built world, and that maybe they too can one-day create something out of the ordinary for themselves or others.

3) What is it like to live in the Fish House? Every person who has stayed there or has lived there, whether for three months or three years, has said that it is an inspiring, creatively stimulating and  energetic environment.

So, after concluding my chat with Eugene, I reached out to Aaron, one of the current residents who shared his experience of living in the house:

“I’ve been living in the house for around two years now. Living there is amazing, it is always delightful to bring a friend over and see how excited and amused they are that a structure like this even exists – it is always a joy. Personally, it’s an inspiration, especially when you see new housing projects, they will never be as creative as the Fish House.

It always feels safe and all the living spaces flow together and feel connected while being separate. The kitchen flows into the living room, which flows into the next room, a small detail which makes a big difference to me and makes the whole house feel like an inclusive environment. The outdoor area, where we have fig trees and other fruit trees, is one of my favorite places to hang out because it feels like an extension of the interior of the house while being outside. Overall, it’s a comfortable and unique experience that not a lot of homes can capture.”

So, next time you are in West Berkeley, be sure to take a trip by The Fish House for a titillating hit of “just wow!” and a literal out-of-the-box inspiration right in our own backyard. Bravo, Eugene, for giving our city something to see, feel and think about today and for our future.